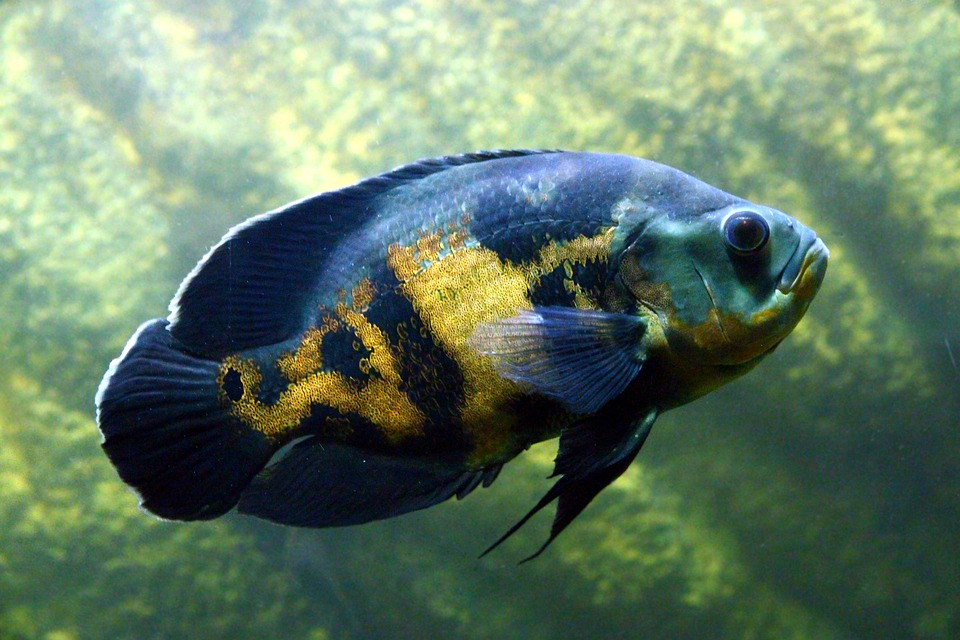 Oscar fish are generally known for their attractive appearance and active mannerisms. In fact, you’ll never get bored watching them at their tanks with their solid interaction skills.

Besides, they’re famous for their aggressive behavior despite their graceful personality (looks can be deceiving!).

Are you brave enough to keep and care for an Oscar fish? Here are the other things you need to know before keeping them in your home tank.

The Oscar fish (Astronotus ocellatus) is a tropical fish species from South America belonging to the Cichlidae family. Oscars are also known as velvet cichlids and are native to French Guiana, Ecuador, Brazil, Columbia, and Peru. You’ll also find them much anywhere in the Amazon River Basin, which is one of the diverse areas in the world.

Their unique appearance, playful behaviors, and intelligence levels are the main reasons why most fishkeepers look after them. Nevertheless, they possess aggressive and territorial characteristics; you can’t keep a peaceful tank unless you have a wide experience caring for Oscar cichlids.

In terms of breeding, Oscar tropical fish are very fussy choosing a mate. You can’t assume putting a pair of Oscar cichlids in a tank and letting them breed. Despite them being difficult fish to pet, their stunning looks and impressive personalities are worth the care.

Oscar tropical fish have many variations in the fish industry, contributing to their after-sought characteristics in the market today.

Generally, Oscars grow much bigger and longer than their cichlid’s relatives. It encompasses an oval-shaped body with symmetrical and fan-shaped caudal fins. A tropical oscar fish may differ in markings and colors, depending on its type. Yet, Oscar cichlids have massive eyes surrounded by an uncolored patch that adds to their beefy look.

Oscars are monomorphic, meaning you can’t identify a fish’s sex by observing its appearance. Male and female Oscars look exactly the same, whether be it on the size, shape, or color. They’re so much identical that you could only determine one’s sex through identifying their sexual organs with the help of an expert. You can only do this after the Oscars reach at least 15 months of age, which they’ve grown about 4 to 5 inches long.

Oscar cichlids are aggressive and territorial in nature. Keeping Oscars with unsuitable tank mates or having a crowded home tank are surefire ways to show Oscar’s aggressiveness. What’s more, the Oscars tend to be more hostile after spawning or if their tank size isn’t an optimal one.

They love to lounge and occupy the middle layer of the tank. Thus, it’s worth nothing to avoid fish species that are middle-dwellers. Besides, Oscar cichlids scrounge on the substrates and dig up some food. They take their aggressiveness on decorations, too, so consider these as well when setting up the tank (we’ll delve into this later). You should also avoid keeping Oscars with smaller fish species, as the latter may get eaten.

Besides all these, the Oscars have interesting personalities. They are widely recognized for intelligence levels, contributing to an active interaction and socialization with their owners. Most fishkeepers describe Oscars as “talented;” they know how to beg for food and follow their owner’s movements.

If you’ve done your homework accordingly, there’s nothing to worry about keeping and breeding this fish species.

How long do oscar fish live?

Compared to related cichlids, Oscars live quite longer. Their lifespan lies somewhere between 15 to 20 years, as long as Oscar fish care is considered. Besides, a tropical fish’s longevity is highly influenced by its genetics and feeding habits.

Moreover, here are the Oscar fish diseases to look after:

To avoid Oscar fish diseases, ensure to provide proper care and treatment. This process involves cleaning the water tank, guaranteeing water parameters are in the same condition, and feeding Oscars with sufficient but nutrient-rich foods. In case an Oscar is infected, isolate them in a separate tank to avoid harming other fishes.

How big do oscar fish get?

Not only do Oscars encompass a long lifespan, but also they grow bigger and heavier than other fish species. Ultimately, Oscar cichlids grow up to 12 inches (30.5 cm) and weigh approximately 3 to 5 pounds. Since Oscars are monomorphic, males and females share the same physical characteristics.

How many oscar fish can be kept in a tank?

As mentioned earlier, Oscars encompass aggressive and territorial characteristics. You don’t want to have a small tank that caters to different species, or it’ll only result in territorial issues. Take note that Oscar cichlids love to dwell in the middle layer of the tank.

The minimum tank size is 55 gallons, letting you keep two Oscars in a tank. For a 100-gallon (preferable) tank, you can keep 3 to 4 Oscar fishes. 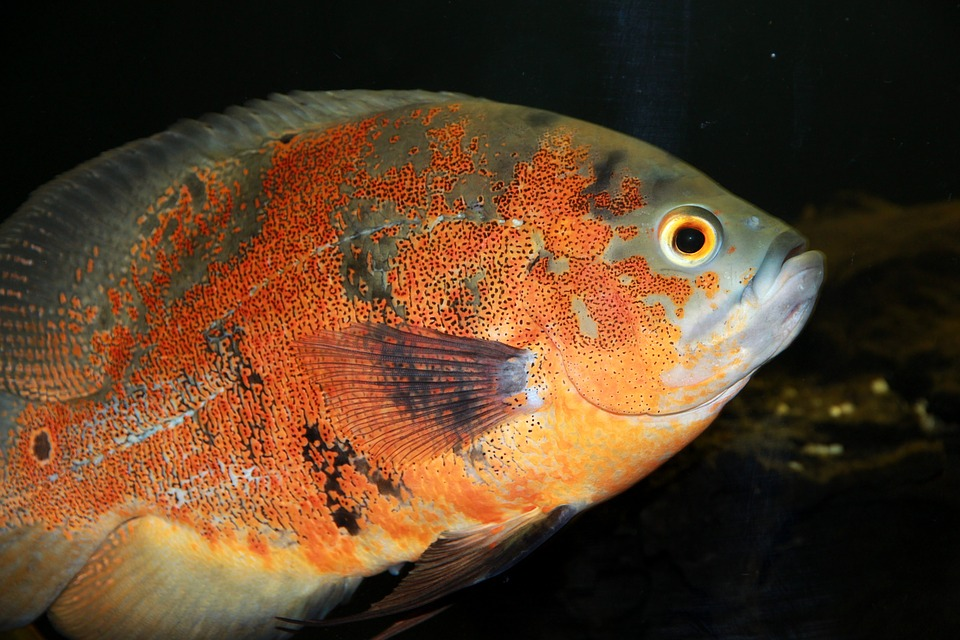 A suggested ratio of one Oscar fish to 25 gallons of water is advised when keeping a community. Nonetheless, the minimum tank size would be a 55-gallon tank to keep a pair of Oscars. Opting for a 100-gallon or more tank size would be better.

Besides the size, choose a longer tank that gives Oscars plenty of swimming space. They also tend to jump if startled, so consider getting a lid for your home aquarium. Oscar fish appreciate a tank setup that mimics their natural wild habitat. Here are the other elements you might need when decorating and setting up your home tank:

Keep the Oscars happy and free from stress by giving them the right environment similar to the natural conditions of their origin. Furthermore, know the importance of water parameters, including temperature, pH range, and hardness (dH):

What do oscar fish eat?

Now that you’ve learned the ideal tank size, setup, and water conditions, it’s now time to delve into the foods that Oscars like to have.

The good thing here is that they aren’t finicky when it comes to food. Oscars eat almost anything that you put inside the tank, as they’re considered omnivores. In fact, fishkeepers see Oscars among the fish species that are easy to deal with in terms of feeding and nourishing. They’ll only require the right balance of greens and meats, and they’re good.

With your tank setup, you’ll most likely feed the Oscars with a mix of processed, meat, and live foods. Bloodworms and brine shrimp are also recommended for Oscars.

Nonetheless, here are some of the foods you can try feeding your Oscar cichlids:

How often should I feed my Oscar fish?

Given their size and development, feeding the Oscars twice to thrice a day is suggested. Yet, consider an Oscar fish’s life stage.

Make sure to give enough food in a tank that’s best consumed within a few minutes. After all, leftovers can cause tank water pollution.

How long can Oscar fish go without food?

An Oscar fish’s size and age determine how much it can go without food for days. Moreover, baby Oscars can survive up to two weeks, while adult Oscars can go four weeks (even more) without eating anything.

Considering the Oscars’ aggressive and mid-dwelling tank behavior, it’s important to carefully choose their tank mates in captivity. Although it won’t guarantee a full-peace tank environment for the fish community, these fish species go along well and do not pick a fight.

Keeping larger, passive fish species that can get out of the Oscars’ way but strong enough to defend themselves. Furthermore, Oscar’s possible tank mates involve:

Based on the list above, you can see that Oscars can live with fellow cichlids’ relatives. Nevertheless, small fishes and small invertebrates wouldn’t get along with the Oscars; they might only end up getting eaten. The same goes for little catfish and sensitive species (such as Discus).

Breeding Oscars isn’t possible, but it isn’t the easiest one as well. Since they’re sexually monomorphic, you can’t easily determine a fish’s sex. They’re also known to display more aggression when breeding and spawning their fry.

One of the challenges of breeding Oscars is their picky behavior. Yes, they’re fussy when it comes to selecting and choosing their mates. If you’re not familiar with how breeding Oscars goes, you can opt for a pair that has successfully mated. But, it comes with a cost.

Another way to find the “perfect” pair for an adult Oscar to keep them in a community of young Oscars. The essence of this process is that they can form a bond with another Oscar within the group, leading to mating. However, this would take a couple of years to happen.

Oscars in the wildlife have their mating season, which typically occurs in the “rainy season.” To create the same environment in your tank, make your tank’s water temperature cooler (for a few degrees). You can encourage the mating process by changing the water condition every two days.

You’ll notice a pair mating if their gills are slightly open than their normal condition. Fins are also shaking (don’t worry, as this process is normal). Ensure that your tank encompasses rocks and smooth surfaces where an adult female Oscar can lay its eggs (a whopping 3000 eggs approximately).

Isolating the fry isn’t needed in this case, as no reports involve parent Oscars eating their spawns. Yet, it’s recommended to move them in a new tank with an installed sponge filter to increase the fry’s survival. Feed them a few times a day and monitor their growth.

Overall, Oscar fish are a great addition to your home tank, thanks to their great personalities, intelligence levels, and social skills. Nevertheless, newcomers in the fishkeeping and fish-breeding industry wouldn’t find Oscars easy to keep.

Moreover, keeping Oscars is best for:

If given a chance, you might consider Oscars one of your favorite fish species with their attractive looks and skills.